It’s not exactly a news flash, but yes, Steven Tyler told the world that he was “ADD personified” on 60 Minutes during a tribute to Aerosmith’s 40th anniversary tour. And there’s no question that his ADD includes the Big H-“Hyperactive.” 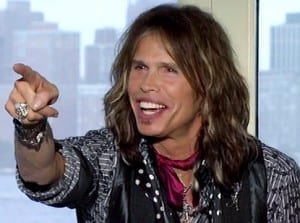 “I used to say my train of thought makes all the stops!” said Tyler, grinning broadly at his own joke.

In a post-show interview, 60 Minutes producer John Hamlin was taken aback by Steven’s wild mental leaps. “Interviewing him was a challenge. When you ask him a question about Subject A, he ends up on Subject D, E or F,” he said. “A lot of times [the answer] has nothing to do with the question we’ve asked.”

Shocking. Yet so familiar to we of the ADD tribe. Tyler’s brain, like ours, beats to a different drummer (and not just Aerosmith’s percussion guy, Joey Kramer). And it beats fast. Tyler needs a heaping helping of stimulation to maintain a modicum of focus, which might be part of the reason he was deep into the drug scene early in his career. Cocaine, heroin – you name it, he was doing it. But drugs are often part of the ADD coping arsenal. Most of us aren’t wildly rich and famous while we’re doing it, though.

Hamlin also seemed surprised that Tyler needed some brain fidgets to help him stay on track during concerts. “A lot of artists these days have things they call “in ears” so they can hear a perfect mix of all the musicians on stage.

“Steven Tyler has a guy who’s Stage Left with a sound effects board and [he] fires sound effects [into the earpiece]. Crazy wacky [sounds] sorta like “wooboobooboo!” like the Three Stooges or “Boing!” to keep Steven entertained!

“I would think that if you’re onstage, the front man of a rock and roll band in front of 15,000 people, that you’re pretty focused on what’s going on. But he’s got a guy in his ear keeping him entertained!”

Yep, sounds like ADD to me. In Steven’s own words:

(Reporter) Lara Logan: So you will actually write lyrics while you’re driving?
Tyler: Oh yeah. Yeah, yeah. Uh, you know what? I’m ADD personified.
Logan: And OCD?
Tyler: I’m not sure about that. But I’m ADD.
Tyler: Um, uh, now I forgot what I was saying.
Logan: Sorry. I interrupted you.

I think I’ll send Steven an ADDiva T-shirt. He’d get a kick out of it. For 6.5 seconds. Before he’s off to his next shiny object. Gosh, it’s good to know that I have something in common with 63-year-old Steven!

The original ADDiva is an ADDiva original. It's good to be different - sometimes.