Agility and ADHD do NOT mix well

Milli the super Sheltie and I went to the AKC agility trial in Raleigh, NC several months ago. I was not looking forward to it, believe me. We had attended our first agility trial a few weeks previously and it was a disaster.

Little  Milli and her mom (me) were stressed  out.  Didn’t know what to do, where to go, forgot my tennis shoes  (clogs do not work well running agility) so had to go home to get them. Topped off by the disturbing knowledge that  Milli’s course started with a closed tunnel. OMG.

A closed tunnel is a solid barrel  about 3-4 feet long with a  fabric chute attached to  one end.  The chute flutters out 11 feet beyond the  barrel, and  when the dog looks into the open end of the barrel, there 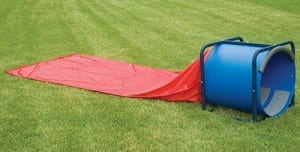 is no daylight showing – thus, the “closed” tunnel moniker.  That’s all well and good except that Milli hasn’t practiced with  a closed tunnel in months. I knew it would be a problem, so I took her home, worked with a makeshift tunnel that I had bought from  an inexpensive agility website and crossed my fingers. It didn’t help.

Milli sat at the entrance to the tunnel and when I said “Release!” she immediately ran around the tunnel  towards me. Tried again. Same problem.  We were disqualified immediately. Next day, she ran the entire course perfectly, except for the tunnel. Disqualified again.

So I wasn’t enthused about the AKC trial but thought it would do her good to return to the same venue. Perhaps she would understand  that this is where agility is run (not just on grass but on mulch inside a big building – the Horse Pavilion at the NC State Fairgrounds, to be exact).

Saturday we were disqualified by a tricky Novice course. We did a little better in Jumpers with Weaves. And Sunday – Milli ran both Jumpers and Standard and we didn’t get booted off the field! Found out Monday morning that she was FIRST  place in both. That sounds impressive but the other two dogs running in our height were absolute beginners and ran all over the field. Not much competition.

But I need to tell you that this triumph is hard won. Agility is NOT an ADHD friendly sport. Not only did it take months and months to train Milli on the equipment, it took years for me to get my clumsy feet pointing in the right direction, to find shoe laces that wouldn’t trip me, to know the difference between a rear cross and a post turn AND to remember where the heck I was supposed to run to next on the course.  Even with little plastic cones with numbers, I am often lost and bewildered – the proverbial deer in the headlights.

My trainer is an international champion in agility. Her dogs not only run accurately, they run FAST. I was told that Milli could compete internationally, she is so fast. But the handler (me) is not really international material. My ADHD brain is so stretched beyond its limits that I think serious competition would  send me running for Valium. And I suspect that my trainer is more than a little exasperated with my dull witted-ness on the field.

So why do I do it? Because Milli LOVES it. And I am a devoted Sheltie mom to this little sprite. And she needs brain challenges. And maybe I do, too. I wonder if agility qualifies as a brain training exercise???

What challenges YOUR brain these days?