Was it sensational?
Yes.
Was it luxurious?
Oh yes.
Was it one of the best days in my life?
You bet. 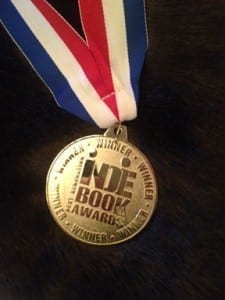 My trip to New York for the Next Generation Indie Book Awards reception was a once-in-a-lifetime thrill. And I savored every minute of it. A brief recap:

Victor and I arrived at RDU (Raleigh-Durham International Airport) at 12:30 am Monday morning due to stormy weather in Denver (we had been on a weekend trip to San Francisco to celebrate daughter Heather’s birthday). But my plane to New York departed at 10:40 that morning! It was a too-short night – unpacking, repacking and driving to the airport less than eight hours later.

I arrived at chilly, rainy JFK a little earlier than expected and took a taxi to Midtown – I had a one-night reservation at the Plaza Hotel, where the awards ceremony would take place.The Plaza is directly across the street from Central Park – lots of landmarks on the ride into town.

When I checked in, the quite nice young man at the desk cordially informed me that I had been upgraded to a junior suite. I didn’t argue and used my key in the elevator to access the exclusive 18th floor. When I opened the door, I was take aback…the room was stunning. 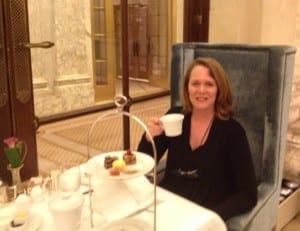 I had a couple of hours before the reception but I was starved – I’d had no time for breakfast. It was past lunchtime in the Palm Room, but they were serving afternoon tea– MY FAVORITE! So I went to tea. So elegant. So tasty. So civilized!

Then I went back to the room and bought  a ticket to “Rock of Ages,” one of the few Broadway shows that has a Monday night performance. A single ticket is a lot easier to find than two together! Curtain time was 8:00 pm so I had plenty of time since the reception ended at seven. 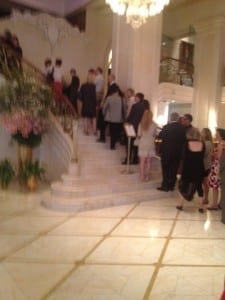 I took a shower, fixed my hair (I’d had my hair cut in San Francisco by a terrific stylist) and makeup and made my way downstairs to the reception.

At 5:02 there was a line across the Plaza lobby and up the marble stairs to the Rose Club. We waited 20 minutes to register and make our way upstairs. Then it was a mad crush. So many people (so many winners — some First Prize, some Finalists, some spouses and friends). Champagne flowed but I didn’t indulge – I didn’t want to fall asleep during the show later that night.

Finally, the awards ceremony began and the three grand prize winners were announced and they each made a brief speech. The rest of us were lined up in order of our categories and prize. By the time they announced the Women’s Issues category (next to last in alpha order) people were chattering so loudly, you couldn’t even hear them announce the name of my book! Ah well, I took my place in line to receive my award and have my picture taken. 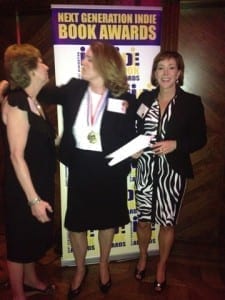 At seven o’clock we were still in line. At seven-ten we were still in line. At seven-fifteen, I finally reached the front of the line and was draped with a surprisingly heavy “gold” medal on a red-white-and-blue ribbon (ala Mark Spitz for those of you old enough to remember). I hugged Marilyn Allen, the literary agent I had met earlier in the evening and was congratulated by Catherine Goulet, the awards chairperson (left).

Then I took off like the proverbial bat out of an awards reception to do a lightning quick change of clothes on the 18th floor and back downstairs to find a taxi. Of course, it was the precise time of day when taxi drivers were changing shifts, so I waited and waited and waited for a taxi that was available.
Finally the doorman flagged down one of those bright yellow cars and we took off like the proverbial bat out of the Plaza Hotel, screeching from one red light to another. We made it in record time to the Helen Hayes Theater (amazing how fast those taxis move in a pinch). 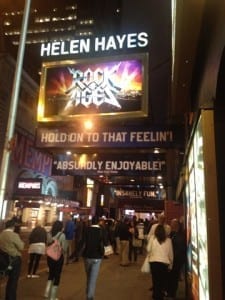 OMG. The line to get in was a block long, but that line was for people with tickets. The Will Call line was shorter. Much shorter. Like…no line at all. I picked up my ticket and walked in ahead of everyone else (that really wasn’t fair, but I didn’t make the rules).

The first half of the show was fair to middling. The second half was terrific and funny. By the end, we were all singing and dancing like it was a rock concert as “We Built This City on Rock and Roll” echoed through the building.

Then came the true test of my New York experience. I actually hailed a taxi and IT STOPPED TO PICK ME UP! So many times, the drivers whiz on by, but this was MY DAY … the first driver stopped and I made it back to the Plaza, music still ringing in my ears. 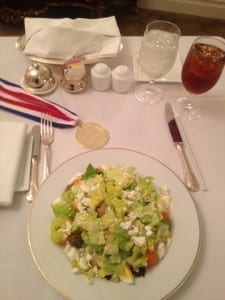 By that time, I was hungry again. So at 11 pm I ordered room service — the Plaza chopped salad and iced tea. And took pictures of my medal nestled next to the food (OK I know it was hokey but I was a small town girl in the big city junior suite!).

When I finally fell into bed (neatly turned down by my private butler with my slippers beside my bed on a linen towel and a bottle of Fiji water on the bedside table) I was deliciously tired and happy.

In the morning, I took a bubble bath in the soaker tub, got dressed and said goodbye to my New York adventure. But what to do with the medal? I didn’t want to crush the ribbon. So I put it in the laundry envelope from the Plaza to get through security at the airport. After that I wore it around my neck. 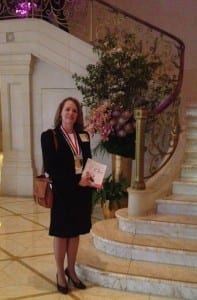 Only one person wanted to know what it meant – the girl behind the counter of the gift shop back at RDU. She even asked for my autograph. I signed my business card for her …

And that is the not-so-brief highlight of my book award and Plaza indulgence. Everyone should do it at least once!