I’ve said before that exercise cures all ills – well, most of them anyway – and now there’s even more proof.  A New York Times article reports on a study that shows obesity can actually cause cognition to flounder and exercise reverses that effect.

The study was done on mice, so no direct correlation to humans can be drawn, but it’s pretty darned interesting that when mice were forced to gain weight through overeating and lounging around the cage they couldn’t navigate mazes they had previously successfully maneuvered. Their thin, slim counterparts were zipping through the mazes like lightning.

Researchers then excised the tummy fat from the chubby mice and voila! Their cognitive skills returned 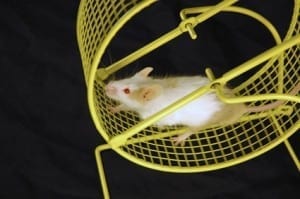 instantly. This experiment had no  practical application for humans because the surgery removed far more  fat from the mice than even extensive liposuction would remove from the human body. Back to the drawing board.

Those lethargic, fat mice were put on a exercise program – encouraged by little puffs of air when they slowed down on the wheel. The scientists pushed the mice to run 45 minutes a day while the other mice were quietly snuggling in the cedar shavings. The active mice were far more cognitively alert than their quiet friends.

There was no attempt to correlate the mouse experiments to ADHD and it’s dangerous to jump to conclusions, but I’m going to do it anyway: our ADHD brains work better when we exercise, whether we are thin or chubby. And if we are overweight, those little fat cells are able to cross the blood-brain barrier and gum up the synapses that carry our neurotransmitters from one neuron to the next.

Lesson learned. Get out and move. Exercise. Slim down. Maybe your brain will work better. It might not “cure” your ADHD but it might make it less problematic.