For two years now, since I gave up my Adderall, I’ve done little to “treat” my ADHD, aside from trying to practice meditation occasionally and being aware of my own ADD-ish methods to Get Things Done.

And I’m not much for new-fangled miracle “cures.” Especially in ADD-land, they are a dime a dozen and almost none of them effective. Yet, I’m still open to the next new thing that might have an impact on ADHD in general, mine in particular.

So I was intrigued by the Integrated Listening System which uses normal sound waves plus “bone conduction” to supposedly stimulate the cerebellum (at the base of your skull) which in turn talks nice to the pre-frontal cortex (those of you who have read my book know her as Ms. Prefrontal Cortex, the keeper of executive function and responsibility and planning, that sort of thing).

Lately, there seems to be some veering toward the theory (and they’re ALL theories) that the ADHD pre-frontal cortex isn’t as squirrelly as once believed. It may be that the neural messages sent TO Ms. Cortex are less frequent which can throw a wrench into the best laid plans. The iLS folks (and some other distinguished experts like Russell Barkely, Ph.D.) believe that the offending brain part that isn’t sending “good”messages is, of course, the cerebellum.

The iLS system consists of an old-fashioned iPod (click wheel variety) attached to a slightly larger and heavier box that is connected to the bone conduction device. The device resides in the top of the high quality headphones provided by iLS (Sennheiser, if you know your audio equipment) and presses against the top of your head. It’s small – about the size of a small matchbox. 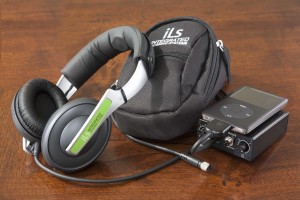 I probably once knew, but forgot that audio vibrations travel not only through our ear canal, but also our bones. When we speak, for instance, we don’t hear much of what comes out of our mouths through our ears. We hear it through bone conduction. Wild, eh? I was skeptical until the iLS folks reminded me that I sound completely different on tape than I do to myself. To me, my voice is lower and more resonant. I was finally convinced when the iLS trainer asked us to try out the system and to turn down the volume on the iPod so no ear canal sound waves would be transmitted. I could still hear the music! I was stunned.

I know it’s a leap from hearing my voice through my bones to helping my ADHD, but I’m going to give it a try. The Concentration and Attention module is 40 one-hour sessions of mostly classical music that is “gated” to amplify specific sound spectrums. Which is supposed to shake the cerebellum into being a nice guy and sending better messages to Ms. Cortex.

It’s a long shot. I’d like it to work. Right now I’m on Day Five. You listen at least 3-5 times a week and I want the full benefit quickly. I don’t resist the sessions, unlike the working memory training I did about 18 months ago (whose name I dare not mention for fear that the company police will hunt me down again). But you aren’t allowed to work on the computer or watch TV during the music, so I am taking long walks with the dogs.

Milli and Sophie love iLS. We’ll see how my brain reacts. I’ll check in periodically — maybe even regularly if it works!