If your menstrual periods were awful, you might be in for a bumpy ride during menopause. Researchers have known since 1996 that there is a correlation between severe PMS (now known as PMDD – pre-menstrual dysmorphic disorder) and menopausal symptoms. For instance, if you have menstrual cramps you’ll likely have hot flashes; if you had premenstrual headaches, they will continue through menopause. 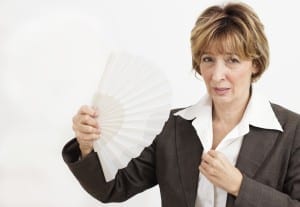 A new study shows that women who had difficulty for any “reproductive event” such as pregnancy, postpartum, menstrual periods and even taking birth control pills have more hot flashes and other menopausal symptoms. Although the study measured menstrual symptoms in seven different areas (i.e. pain, water retention, concentration, etc.) the most important connection was the level of pain experienced during menstrual periods.

Why is this important to women with ADHD? Because estrogen fluctuations are the reason ADHD symptoms get worse each month, better during pregnancy and worse again at menopause. Those neurotransmitter connections don’t work as well with low estrogen reserves. So if you had difficultly with cramps, headaches and “foggy brain” during your periods, you most likely had hormone related symptoms which also affect ADHD. And if you had them during your child bearing years, you will most likely have more severe reaction to hormone swings at menopause.

The most recent study was published in the current issue of Menopause (August 2013, Vol. 20, Issue 8); the first author of the study is Suzanne Stone, Ph.D. One of the references in the article mentioned that there is another study (2012) that shows that women who are more sensitive to hormone changes may also have a lower pain tolerance. And pain tolerance is linked to sex hormones!